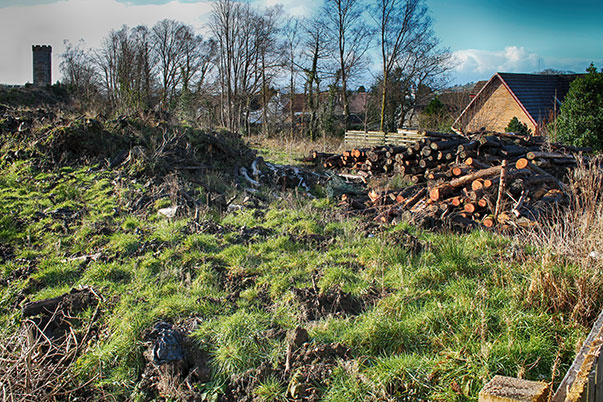 Almost four years after woodland at Cumberland Avenue, Helensburgh, was unlawfully felled by its owners in May and June 2011, HCWG says it is high time that the mounds of debris and logs still remaining on the site were cleared out. That’s why we’ve initiated a new campaign to persuade Argyll and Bute Council to take action under Section 179 of the Town and Country Planning (Scotland) Act 1997 to require the removal of leftover debris and logs.

HCWG has written to Councillor David Kinniburgh, Chair of Argyll & Bute’s Planning, Protective Services and Licensing Committee, making the formal request for action to be taken. You can read that letter here, along with the leaflet we are distributing in the neighbourhood around Cumberland Avenue. We will then be collecting signatures on a petition to be presented to the Councillor Kinniburgh and the Leader of the Council before the April meeting of the PPSL.

If you can help delivering leaflets or collecting signatures on the petition, please get in touch with Gordon Greig at gordon_greig@talk21.com

On 26 April 2013, it was announced that J Allan Osborne (Preservations) Ltd had been placed into voluntary liquidation. This was one of four related companies for which Margery Osborne and Thomas Paterson were listed as directors. The other three companies, which were unaffected by the liquidation of J Allan Osborne (Preservations) Ltd, were Osborne (Builders) Ltd, Parkhaven Ltd and Osborne Interiors Ltd. These three companies still remain in active business as evident from on the Companies House register, which can be searched here:

The Companies House register also reveals that, earlier in April 2013, the registered name of Osborne Interiors Ltd had been changed to Parkhaven (Property) Ltd and that of J Allan Osborne (Preservations) Ltd to Parkwood (Glasgow) Ltd. At the same time, the registered offices of the companies were transferred from Helensburgh to a firm of accountants in Glasgow.

Importantly, Castle Woods and the land at Cumberland Avenue is owned by Margery Osborne and Thomas Paterson as individuals and not by their companies. These sites were thus not directly affected by the liquidation of J Allan Osborne (Preservations) Ltd.

You are invited to support the work of Helensburgh Community Woodlands Group either in addition to your membership subscription or as a separate donation.

Castle Woods: here we are seeking to save the historic Woods from destruction by a proposed housing estate of between 48 and 72 dwellings and ensure instead that it is turned into a well-managed community woodland.

Cumberland Avenue: here, we are working hard to secure the restoration of land at where woods were felled in 2011.

We would encourage you to respond to recent news by ‘leaving a reply’ at the relevant website or sending a letter to our local paper, the Helensburgh Advertiser at: editorial@helensburghadvertiser.co.uk
Helensburgh Community Woodlands Group is not responsible for the content of any external websites to which links are provided from this website.